Mere serendipity allowed me to witness this spectacle this morning: 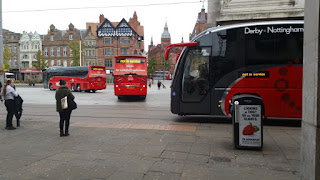 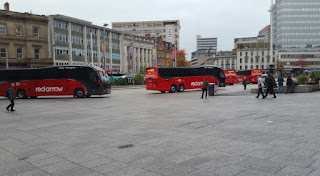 For most of today in Nottingham's market square, Trentbarton was unveiling their upgraded Red Arrow fleet, which the company's website notes is composed of Plaxton Elite-i class buses, with a focus on greater customer comfort and expanded timetables. The event consisted of displaying the new buses, having people tour them and giving out information about the Red Arrow line. 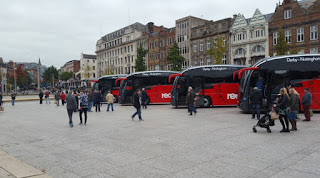 Red Arrow is the non-stop route between Nottingham and Derby. While I have not yet travelled on the Red Arrow line, the route has certainly interested me in the past (the current Red Arrow buses are still, in their own right, impressive behemoths observable in the centre of Nottingham) and seeing this new fleet has most definitely increased my curiosity. I shall have to plan a trip to Derby soon - not necessarily to see Derby but to ride Red Arrow and back!
Posted by Andrew-L'autre at 22:54