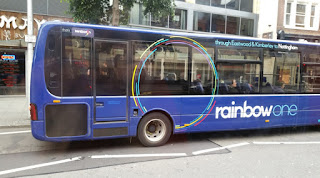 Here is the middle and back of a Rainbow One bus; coincidentally, I was on board a Rainbow One bus when I took this photograph. On the Trentbarton buses I've travelled on so far, the interior colours match the exterior, so seats on the inside of Rainbow One buses are blue. 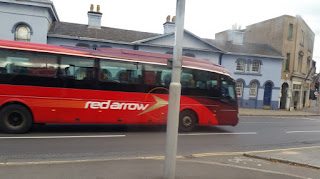 This is a current Red Arrow bus, which I am assuming will be gradually replaced with those from the new fleet. This picture was taken on the same day and place as the aforementioned Rainbow One bus. The image is a little blurred because both the Red Arrow and my bus were in motion. 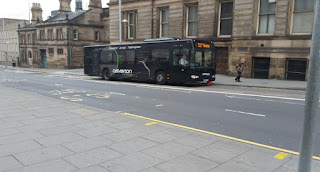 And this is the Calverton Connection. This was on a different day to the above two images and I was standing outside rather than on a vehicle. The only other black buses I've seen and ridden in Nottingham were (I think) a reserve Rushcliffe Greens bus I encountered a few months ago.
Posted by Andrew-L'autre at 20:46