At the bottom of the disagreement pyramid

On a certain popular Facebook page last week, the owner posted a joke that involved animal cruelty. Now, I have a fairly healthy sense of humour but even I have limits - I do not enjoy laughing at the suffering of others. As such, I posted a comment critical of the joke and since my comment was among the first posted, it received significant attention and was soon the most "liked" comment in the thread.

While the comment went on to be my most "liked" to date (160+), it was not without its critics. In fact, I would estimate that over half the people who left a non-like response opposed me. I say "oppose" because they were not discussing or arguing against me in a constructive manner; no, far from it - they immediately descended to the bottom two tiers of Graham's Hierarchy of Disagreement: 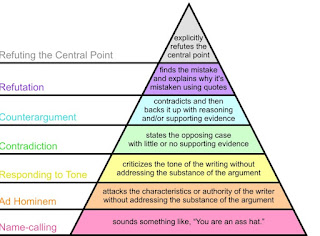 The first person to respond fell into the "Ad Hominem" tier, as they decided to interrogate me on whether or not I am a vegan and a user of animal products. Their goal was to derail my criticism by painting me as a hypocrite if I answered no and yes, respectively, or to label me as a liar if I said I did not use animal products (everyone uses animal products in everyday life, whether we like it or not). Other people who fell into this tier were those who mocked me for being "offended", even though I clearly stated that I had not taken offence and that criticising something does mean that someone is offended. Also, even if I were offended, that wouldn't have invalidated my point.

A couple of others attacked my intelligence, claiming that only someone with a low IQ would criticise the joke or not appreciate the humour. Most other people fell into the bottom tier, "Name-calling". Yep, because yelling "you're an asshat/idiot/stupid" is an excellent way of refuting an argument. I shrugged off the trolling and in one instance flung an insult back at its speaker; as tempting as it was to engage in reciprocal obnoxiousness, I maintained my composure.

My point is that I was astounded - although I shouldn't have been - at the amount of people who jumped to aggressively defend a poor joke by maligning me. Over a joke involving cruelty to an animal, at that! Even if people had politely disagreed I would still have regarded their views as wrong and would not have been convinced by their arguments but I would have at least respected their willingness to engage in constructive debate. By attacking me, not only did they reinforce confidence in my own perspective but they left me with a negative impression of people who laugh at the type of joke I opposed. It's disappointing that so many people think that trolling and vulgarities, backed up with no substance whatsoever, is a valid form of debate.

A few people defended me, such as by agreeing, telling others to not "jump on the bully bandwagon" and by praising me for speaking up, all of which I appreciated. Less than 24 hours after my comment was posted, the joke was deleted; while I did not ask or demand the joke's removal (they were free to post, I was free to criticise) I nevertheless appreciated this response to my comment, to those who made similar comments and to anyone who agreed.

It is possible to disagree with someone without insulting them. If you disagree in a constructive and civil manner, at the very least you and the other person will have respect for each other and the possibility exists for one person to change the other's mind. By contrast, if you denigrate someone, it is almost certainly guaranteed that you will not defeat their argument and you will most likely cause that person think that anyone with your viewpoint is prone to attacking rather than debating.

Note: above image is not mine and is from: https://commons.wikimedia.org/wiki/File:Graham's_Hierarchy_of_Disagreement-en.svg
Posted by Andrew-L'autre at 23:19