I photographed this trio of daffodils yesterday afternoon; that one at the back there, despite being close to the ground, was a healthy flower: 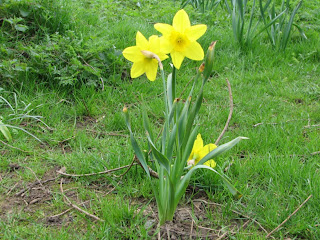 They're pretty, aren't they? There's no need to harm them. Now here are the same three daffodils this afternoon: 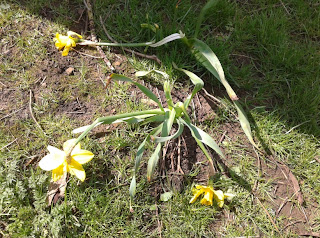 Someone stomped on them. At first I thought the hail had smashed the trio (we had a hailstorm appear this morning, unleash its massive load and then disappear as quickly as it had appeared), but as all the other daffodils were intact and these three were the only daffodils with any damage, it became clear that an individual had taken it upon themselves to stamp them down.