A neighbour recently told Dad about a local pond inhabited by fish and a terrapin; the pond isn't far from our house but we had never been to it before because it's by a field we don't usually walk near. Dad and I went to the pond this afternoon: 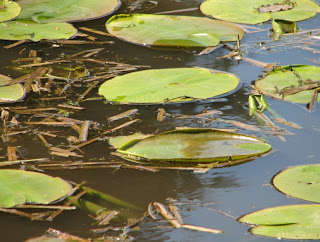 The pond was filled with lilypads and reeds. There were a few branches and a log present in the water as well. 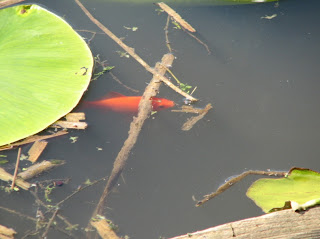 A goldfish; Dad estimated that there were at least 50 of them in the pond. They would frequently surface near the lilypads or whatever part of the pond Dad and I weren't near, although this particular fish didn't care.

Dad and I did see the terrapin, but it was swimming too fast for me to photograph; it wasn't possible for my camera to focus on a rapidly-moving reptilian head in water. A couple of teenagers who were at the pond while we were there said that they had seen three terrapins in the water before.
Posted by Andrew-L'autre at 23:23