Time for another one of my phone rants; I've seen this image float about the Internet a few times recently: 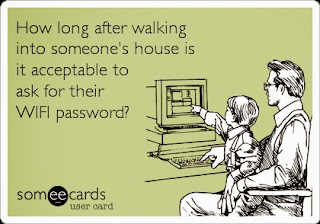 I also found this article by Rebecca Showerman, which contained a (small) poll regarding how people feel about asking someone in their home for their wifi password. While Showerman herself stated that her answer would be "within 5 minutes", my answer to that poll would be "Other - I will tell you in the comments".

Nine times out of ten, I do not ask for someone's wifi password. Why? Because the reason I visit someone's house is to see people, not to play around on the Internet with my phone, which I can do at home. Messing around with my phone in another person's home is an unsociable activity and, in my opinion, is an excellent method to prevent being invited back. In the event I do have to use the Internet, my mobile data is sufficient. Besides, whenever someone comes to visit me I don't occupy myself with my computer or phone, so why should I do it elsewhere?

Another reason I don't usually ask for the password is because I consider other people's Internet — both the password and the use of the Internet itself — to be private. To be fair, the password privacy concern can be rectified by allowing the other person to connect my device to their network themselves.

As for when I would ask, the most likely occasion would be if I wanted to show my friend something on the Internet, I had to use my phone to do it and needed something faster than mobile data. Another would be if an urgent need to use the Internet arose and it again required my phone. I also agree with the last sentence of Showerman's post, "Does it depend on who you are visiting?": for example, if I'm visiting someone with interests in phones/mobile Internet, that could influence me to ask if I think it would be useful. In addition, I'm happy to connect to someone's network if they make an offer.

I'm curious, how do you feel about asking someone, in their own home, for access to their Internet, in particular via your phone and needing to use their password? How about if it's the other way around? Everyone is entitled to their opinion and I want to state that I would not demand someone leave my house for wanting to use the Internet!

Note: the above image is not mine; the credit goes to http://www.someecards.com/usercards/viewcard/MjAxMi05OWNlNWUyNDc5NzMwNzJj
Posted by Andrew-L'autre at 23:43