So, just prior to last month's half-term break I encountered the unveiling of Trentbarton's improved Red Arrow bus fleet. I noted in my post from then that I had yet to travel on a Red Arrow; well, I have since rectified that problem. 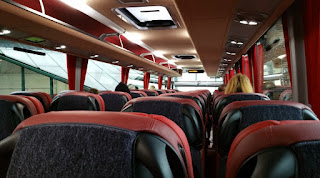 The first thing I noticed when I boarded one of the new Red Arrows was the presence of a "new car" smell. Prior to stepping on board I had never experienced such a smell on a bus before; while I'm not particularly enamoured with the scent of a new vehicle, I nonetheless found it impressive on a bus. Secondly, I noticed air-conditioning. On the other bus routes I'm used to having the windows open for cool air, including on the routes that are significantly longer than Red Arrow.

As for the seats, I found them to be comfortable. They were firm but gave just the right amount of give for a comfy ride. In addition, they were equipped with belts, which I think is excellent, as I think seat belts on buses is a great idea, especially since buses frequently come to sudden halts or sharp turns. However, despite the notification advising passengers to wear the seat belts, I appeared to be the only one who heeded the advice.

With regards to the journey itself, it was a stable ride with no obvious bumps. The Red Arrows are a fast route between Nottingham and Derby, so the Queen's Medical Centre is the final stop within Nottingham; after that, the remainder of the route is non-stop to Derby's bus station. The journey took a little over half an hour, although that time can vary depending on traffic. 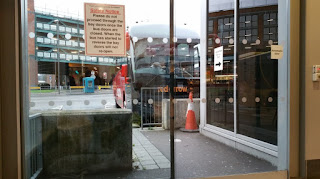 Overall, I found Red Arrow to be a worthy route and I was beyond satisfied with my ride. For anyone seeking a fast and comfortable bus journey between Nottingham and Derby, Red Arrow is my recommendation and choice.
Posted by Andrew-L'autre at 23:48