Eddie Izzard and the University of Nottingham session

Two days ago, I received a message via my college e-mail address about an event at the University of Nottingham today, at which comedian Eddie Izzard was to give a speech/Q&A session about his perspective on the upcoming European Union referendum here in the United Kingdom. My college had received some tickets by the university and the tickets were offered to some students on a first come, first served basis. I was the first to request one. 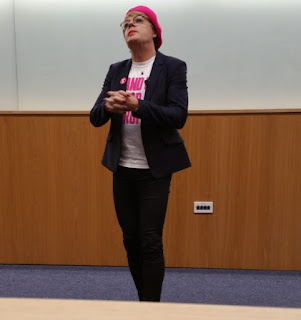 Izzard is in favour of the United Kingdom remaining in the European Union and his session was geared towards convincing students to vote to remain; however, he provided his audience with advice that applies to anyone. For example, he advised that people should not rely on soundbites when they wish to make an informed vote; if a politician or other high-profile figure makes a claim, that claim should be researched rather than unconditionally believed. Izzard encouraged people to vote in the referendum regardless of what they ultimately choose.

Overall, I very much enjoyed Izzard's speech/Q&A. He provided a decent balance of comedy and information and kept to a positive theme. Three other students travelled with me from my campus, as did a member of staff, and they also enjoyed the session; in addition, we became friends.
Posted by Andrew-L'autre at 23:45