C2C: Country to Country at The O2 Arena

I travelled to London on the 17th to attend the second day of C2C: Country to Country, the United Kingdom's first multi-day country music festival. I met up with my friend Becca around midday and we travelled to The O2 Arena, which is located in the Royal Borough of Greenwich. 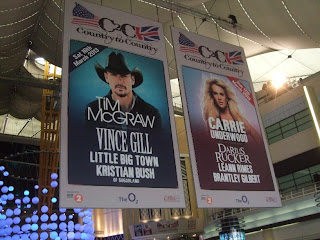 When we entered the O2 we were greeted with this huge banner hanging over the festival. Tim McGraw played the night before, and would have been good to see in his own right, but Becca and I were more familiar with the acts on the second day. McGraw and Carrie Underwood headlined their respective days. 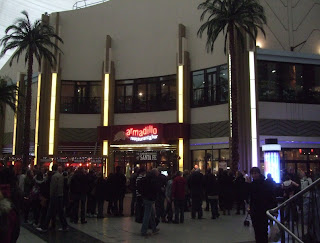 Beyond the entrance was the Town Square, which was devoted to "capturing the spirit of Nashville". The area had an abundance of merchandise stands, booths serving Southern United States-style cuisine, stands with country-themed clothing and restaurants; there was also a whisky bar, a small stage for the Pop Up Stages and even a cinema. The amount of food available made it impossible to not eat, and all the clothing stands ensured that someone into cowboy fashion wouldn't have to look hard for it (although paying for it was a different matter, as one hat cost 55 euros, which is around £47 or $71!). 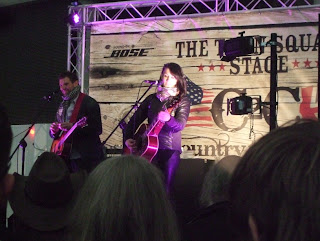 This is Jill Johnson, one of the acts in the Pop Up Stages. She is a country singer from, of all places, Sweden. Johnson was the only one of the Pop Up acts we spent a significant amount of time listening to; I enjoyed both Johnson's music and her humour, the latter of which appeared whenever the sound systems temporarily went out or she had something to say about one of her songs! I'll have a look at more of her work, because she gave a fine performance. 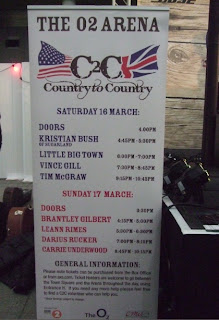 I photographed the line-up after Johnson had finished her set. The Pop Up Acts had their own timetable, located on another poster. 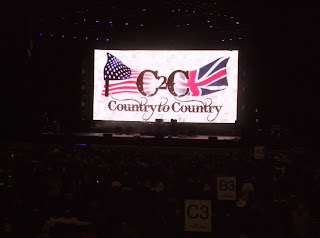 Now for the O2's auditorium: This is the primary screen. It displayed each of the first three performers' logos while they were on stage and between acts it showed C2C's logo; it had multiple displays for the final performer. 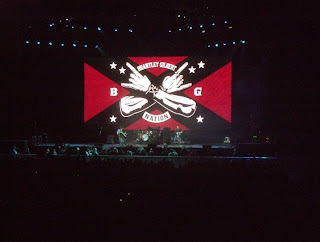 Brantley Gilbert was the first and shortest act, as well as the person we were both the least familiar with. His music, as he described on stage, was country rock, which uses heavier guitars than traditional country. I had never heard country music like Gilbert's before, but as he said, it's a diverse genre.

All four of the acts were from the South, but Gilbert had the strongest accent among them, which he acknowledged when he joked about the audience not understanding his "redneck accent". 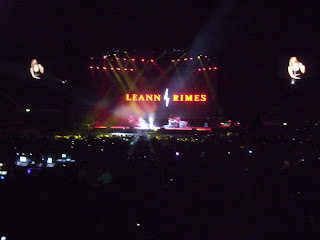 LeAnn Rimes was the artist I was most excited to see. Granted, I love Underwood's music and I was curious about the work of the other two performers, but I have known about Rimes longer than any of the others (since I was seven or eight) and never expected to attend a concert with her giving a performance. It was a delight to hear her sing live; I particularly enjoyed "Can't Fight the Moonlight", "How Do I Live" and "Spitfire". Rimes concluded her set with a rendition of "Amazing Grace". 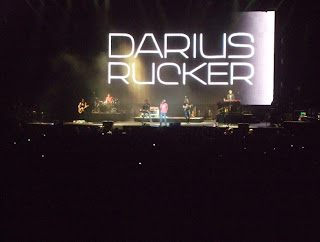 Rimes may have been the artist I was looking forward to the most, but I had high expectations for Darius Rucker and wasn't disappointed. I wasn't overly familiar with Rucker, but the songs of his I had heard were pleasant and Becca has been a fan of him for quite some time. I was impressed with his live versions of his songs "Alright" and "Wagon Wheel", among others. I also liked it near the end of his set when he photographed the audience and tweeted it on the spot! He finished with a cover of "Purple Rain". 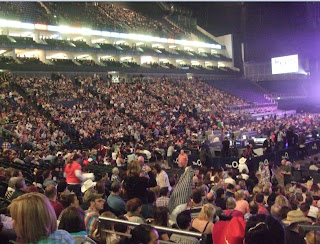 This is a picture of the crowd taken between Rucker's and Underwood's performances. As you can see, the arena had a high turnout. The atmosphere was vibrant...it pleases me that country music is popular here in the United Kingdom.

The demographics of the crowd were as diverse as they were at the Royal Albert Hall. People of various races, ages and nationalities were present at C2C; there was also a substantial amount of Americans in the audience. 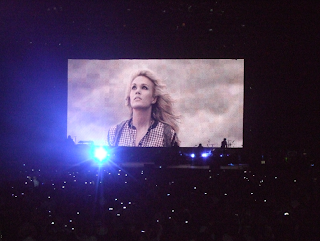 Carrie Underwood came out onto the stage at around 8:50. Her performance began with the primary screen displaying a mini-movie resembling scenes from her "Blown Away" music video. The movie lasted for a couple of minutes, preventing it from occupying too much of her allotted time on stage. 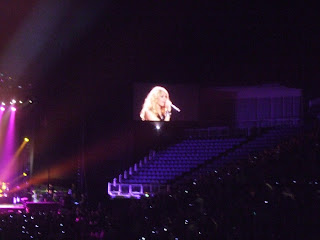 I loved Underwood's performances of "Cowboy Casanova" and "Two Black Cadillacs"; both are among my favourite songs of hers. Here's Underwood on the right-hand side screen. 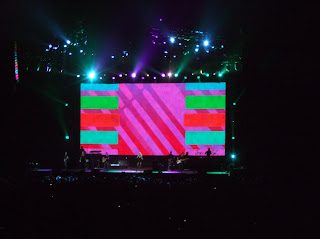 Here is Underwood on stage. The primary screen showed different images and movies for each of her songs, not just a pattern as shown in this picture. For two examples, during "Two Black Cadillacs" the screen showed a montage of a black Cadillac which had "2BLKCAD" on its plates, whereas for "Jesus, Take the Wheel" it had a painting of a church which brightened as the song progressed. I did not consider the screen to be a distraction from Underwood herself.

Unfortunately, Becca and I did not see all of Underwood's performance. We had to leave slightly early for me to catch my train in time; we only missed four songs, including "Before He Cheats" and "Blown Away". Other than that, we thoroughly enjoyed the concert and hope it becomes an annual event for the United Kingdom. There is an appetite for country music here, as we have discovered from the two country concerts we have attended so far.

After the concert, I caught my train home in time, but the events proceeding my departure from London are better suited in a separate post, which I'll cover tomorrow!
Posted by Andrew-L'autre at 23:36